Vintage sewing: a throwback and a newly finished project 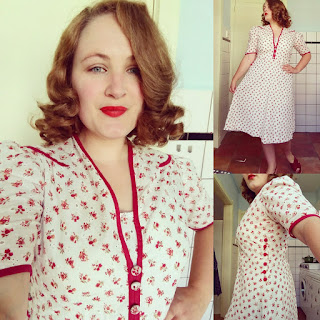 Sewing from scratch, I don't do it that much. I must admit that I often find it easier to buy real vintage that needs some TLC than making an entire garment. But I used to do it a lot more, especially when I was into Victorian styles as a teenager and when I started wearing 30's-50's vintage and my wardrode wasn't as complete as it is now. When looking through a pile of fabrics at my parent's a few weeks ago I found this dress between scraps of the same fabric. I had quite forgotten about it. Such a nice rediscovery!

It was made from a 1939 pattern in the Dutch women's magazine 'Het Rijk der Vrouw' (freely translated: the woman's domain'). This magainze offered lots of models of which the patterns could be ordered either in a standard size or made to measure. Some patterns were printed for free in the magazine though. Usually in a size 42, probably the most common size. It still is the most common size in the Netherlands, but due to vanity sizing a 1939 42 is smaller than a modern one. But not even that small (92b/74w/101h cm or 36/29/40 inch), might even be called volup on modern vintage listings. Which shows that in general women were slimmer (as 42 is now about a 96 to 102 bust depending on the shop), but not all tiny as extant vintage clothes sometimes seem to suggest. 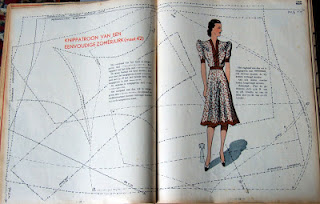 It is called a simple summerdress, and the pattern is easy to make. Because of the size of the pages the patterns sometimes have to be elongated. There are no real sewing instructions, which is fine for me as they tend to only confuse me.

Last week I took the magazines with me to a pattern exchange/sewing day with my friend Lynn. I drew the pattern of the dress out for her again. 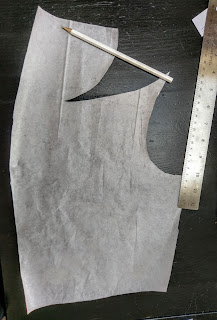 You can see that instead of a dart the use of a mock yoke creates space for the bust. 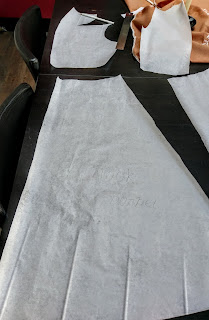 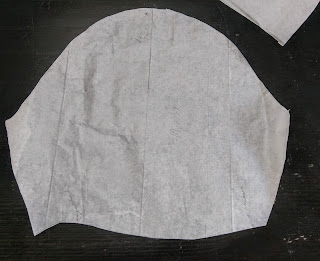 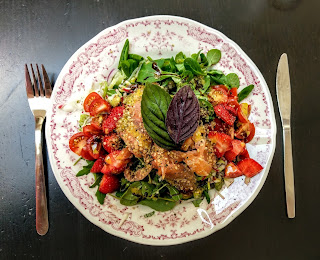 Lynn made us such a pretty salad for lunch I just had to share a picture.

When working on het pattern I was surprized I remembered it so well. I made the dress in 2009. 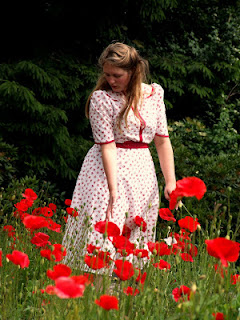 This picture was taken in my parent's garden when the dress was not at all finished, and partially pinned togehter. At that moment I wanted to add a belt, but I didn't in the end. And how long and blond my hair was! Seven years..... 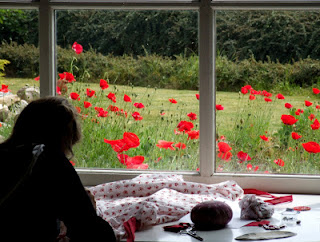 There are even pictures of me working on the dress :) 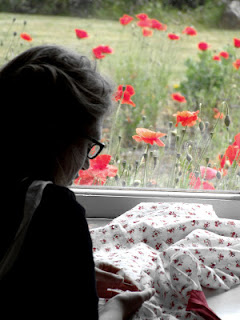 I only used the basic pattern but took some details from other designs from the same magazine. 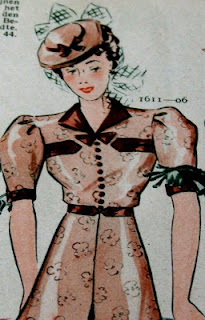 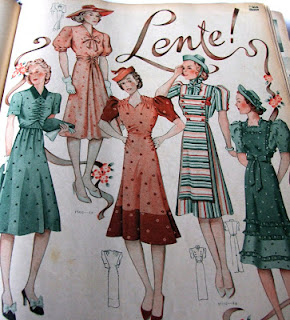 I particularly loved the dress in the middle of this picture with all the buttons at the waist. I added a button side closure on one side a a row of decorative buttons on the other. 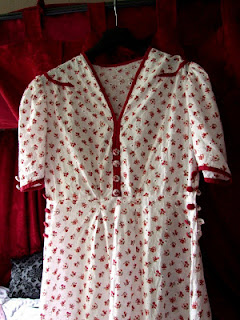 This is how the finished dress looked in 2009. Because my bustsize inscreased somewhat over the years and it was a bit low cut I inserted a V shape of fabric as you can see in the first pic.

That not all women were used to making their own clothes is shown by these series of instructions for making clothes from the same magainze as the pattern of the dress. The title is 'a thread a day' and is the beginning of a saying that ends 'is a shirtsleeve a year'. Meaning that doing just a little bit will become something substatial over time. 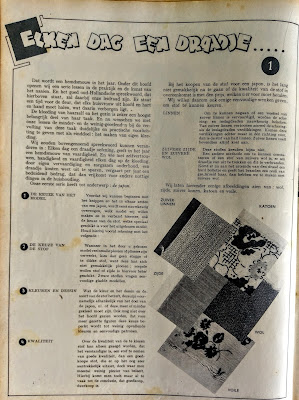 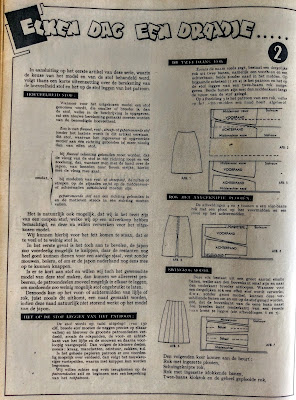 What I think is very usefull is that they discuss basic patterns for skirts, bodices and sleeves that were common at the time. 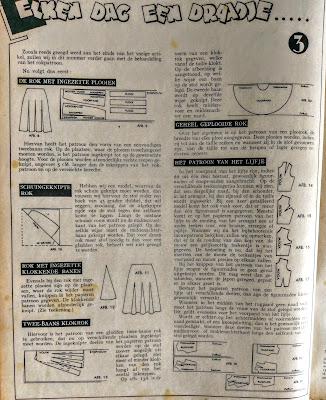 When you understand these you probably won't have too much trouble understanding more complicated patterns even without instructions. 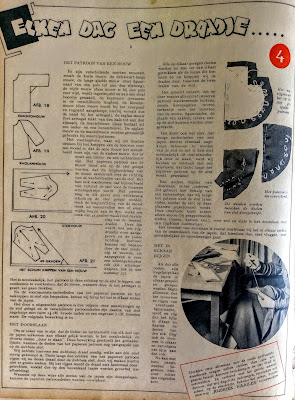 The latest thing I've made from scratch is a pair of lounging/beach pyjama pants. I used a pattern I ordered from Eva Dress years ago. It is a reproduction of a 1934 set of loungewear. 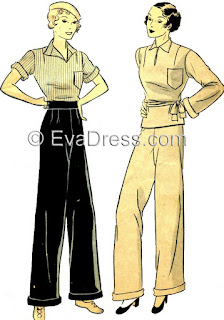 The pants don't look nearly as wide as they really are on this picture. 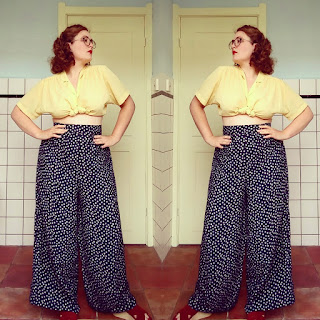 This is the finished product. I used dark blue rayon  with dots in white, pale yellow and lighter blue I had had for years. This was perfect as I wanted it to match the 4 blue bathing suits I own. It was when looking for this fabric I found the 'lost' dress from 2009.
And so this post is drawing to and end!

Hope to be back soon with some 'summery' posts :)
But let's finish with a question:
Do you prefer buying actual vintage or making clothes yourself?