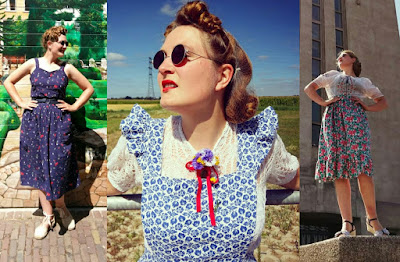 I sometimes get asked whether I can do everything in my vintage clothes. The answer is yes, technically I can, and usually I do. But I do take care what I wear for which occassion, just as you'd do with modern clothes and as they did even more so back in the day.
When I was going on a cycling trip through the Netherlands with one of my best friends I had to pack practical clothes, that's always a challenge for me....
I thought it'd be nice to share my packing choices and looks with you (and a little bit of the sights we saw)

The trip would take three days of cycling 45-70 km a day. Now I cycle a lot in Amsterdam but never greater distances so I wanted to be sure I my clothes were comfy and practical enough. Also: temperatures were around 26-30 degrees. The clothes had to be cool enough but also protect me from burning as we were outside almost the entire day.
My first plan was to go for shorts and blouses/tops but I actually feel more secure in a skirt. I'd feel too naked walking around in shorts in the museums we planned to visit. The skirts could not be too
narrow (your legs should be able to move) or too wide (or the skirt would not stay in place).
In packing descriptions from old magazines you see a lot of separates. I'm usually a one piece dress kind of girl but I went for blouses and skirts this time.
I wore one outfit and packed two, normally I would take one extra just in case but space on the back of a bike is limited. 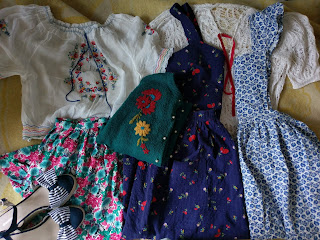 A 30's-50's Hungarian blouse I recently found was the starting point. It could be combined with all three skirts. Just like the 30's knitted blouse. The top of the dark blue set is the only thing that didn't look right when combined with the other skirts. 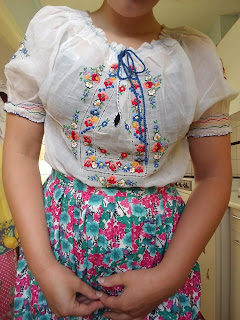 On the first day I paired the Hungarian blouse with a late 40's jersey skirt. This skirt is the only original vintage 'bottom' I packed. 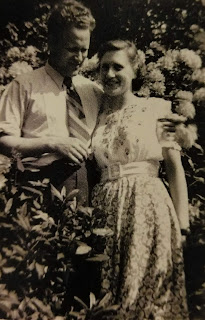 The look was inspired by this picture of my grandma (with my grandpa) in the early 50's wearing a similar blouse and skirt.

On this day we cycled accross the Veluwe. First we visited the Kröller-Müller Museum and Jachthuis Sint-Hubertus (built as a hunting lodge for the founders of the museum around 1920 by Dutch architect Berlage) 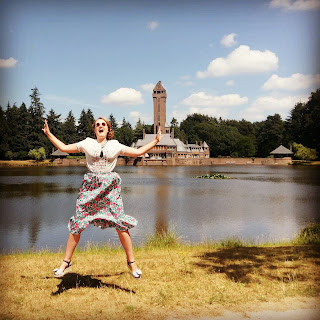 In front of the hunting lodge 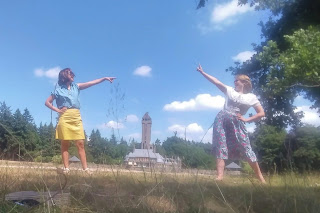 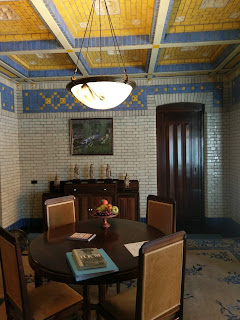 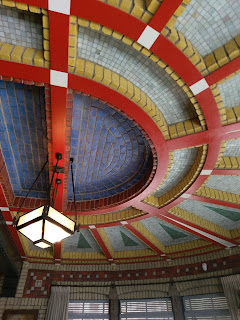 The interior is amazing: lots of brightly glazed brickwork 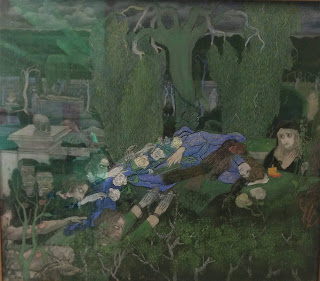 The painting in the back of the room in a copy of the original by Jan Toorop we saw at the museum.

We continued our journey to Radio Kootwijk. A radio station built to make contact with the Dutch Indies in the 20's. In the middle of the barren landscape of hills and heath it looks futuristic. The architect was inspiredd by the mythical Sphinx. 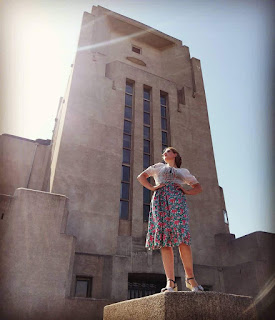 Then we cycled to Epe where we had booked an hotel. 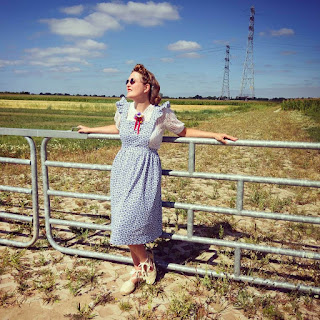 On the second day I wore a pinafore dress I made from an old curtain. We cycled along the river IJssel. The landscape is exceptionally dry because we are having the worst drought in 40 years at the moment. 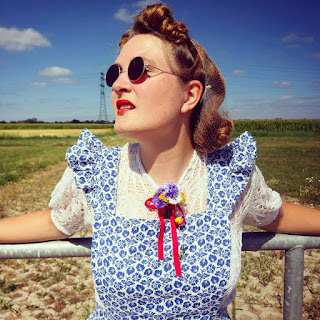 We picked some flowers from the side of the road. I tied them in the red ribbon I wore with my 30s knit top. 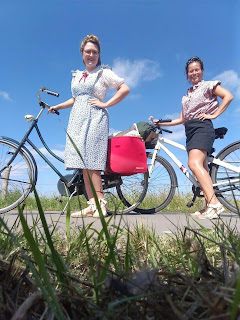 Not the best photo but proof we were actually by bike.

We visited Het Nijenhuis a castle where part of the art collection of a bigger museum in Zwolle is on show. 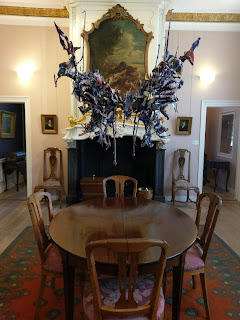 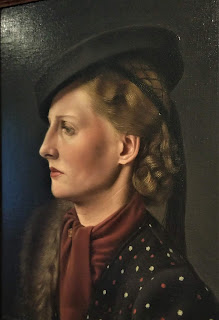 My favorite painting in the museum is by Carel Willink: a portrait of his wife Wilma in the late 30's

I later found out it wasn't the first time I'd been at this museum. Though I had no memory of it I was there with my grandparents when I was 4 or 5. 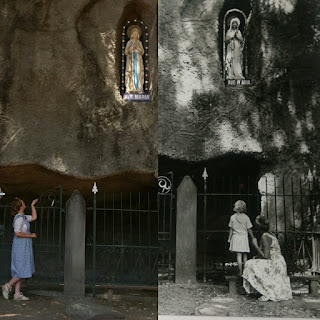 Another place from my childhood: The Lourdesgrotto in Luttenberg, where my grandma often took me.

We stayed at my grandfathers' near the Sallandse Heuvelrug. We had an evening picknick
on the top of the Haarlerberg (Haarler mountain, though it's only a hill, we don't have mountains in the Netherlands) 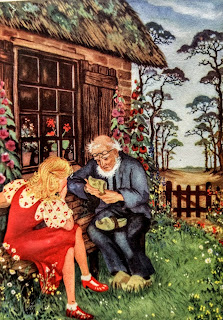 A picture from a book my gran got for het confirmation at 14. The pictures are so pretty and inspiring and the story features a cycling trip on the Veluwe with a girl visiting her grandfather. Maybe it was somewhere in the back of my mind when I planned this trip :) 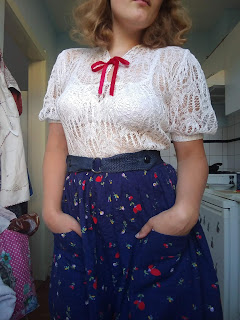 Because this was going to be the hottest day of the trip we got up at 6 and made an early morning walk on the moors before breakfast. I wore a skirt and top set made and worn by my gran in the 70's or 80's out of cotton seersucker. In the morning I wore the knit top over it because it was still a little 'chilly'. 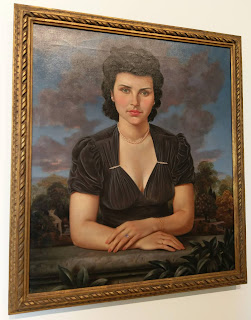 Such a stunning portrait!

After lunch we went to Deventer and visited the toy museum. 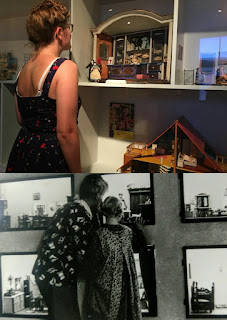 Again not the first time I visited! 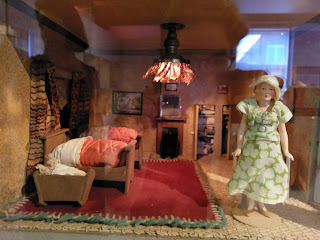 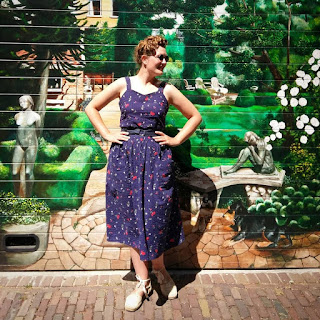 The Walstraat in Deventer features several painted walls, most of them with scenes from Dickens. This however was called 'The Secret Garden' one of my favorite books (and movies) when I was a child.

And that concluded out trip & my 'practical' outfits. I'm thinking about writing on vintage swimwear next time as I get asked about that a lot too.